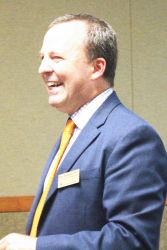 Alan Bigelow, Ph.D. joined Solar Cookers International (SCI) in 2016 as Science Director and Main Representative of SCI to the United Nations. He leads testing and performance evaluation programs at SCI and advocates for solar-thermal cooking at the United Nations.

Alan is a physicist and a solar cook. He has led solar cooking workshops locally in New York and internationally in India, Nepal, Haiti and Kenya. He participated in a solar expedition in Nepal where during nine days at high altitude all meals were prepared using portable solar cookers. He designed solar-energy workshops as a Scientist-in-Residence at the Hudson River Museum and he included solar cooking in a course on sustainable engineering he designed and taught at Columbia University’s Science Honors Program.

Prior to joining Solar Cookers International, Alan had a 15-year physics research career at Columbia University Medical Center developing innovative technology for radiation-biology studies. He has authored numerous peer-reviewed journal articles and is listed as an inventor on patents for safe sterilization methods that use a specific range of ultraviolet light, far-UVC light, to selectively damage bacteria and viruses while not harming human cells.

Alan received a Ph.D. in Physics in 2000. He is a Climate Reality Leader trained by former Vice President Al Gore. He has expertise in designing and using off-grid solar photovoltaic (PV) systems and completed the entry-level photovoltaic course and exam offered by the North American Board of Certified Energy Practitioners (NABCEP). He is also an accomplished musician and co-founded a solar-powered eco band that combines science and music to raise awareness and educate about environmental issues and solutions. He is often solar cooking at home or in public. Languages: English, French, Thai, Hindi.