From the Journal of Barbara Jodry 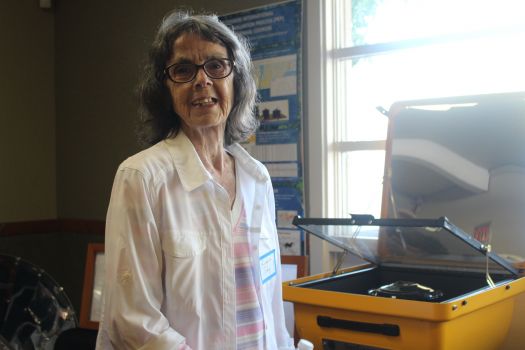 Thirty years ago, Solar Cookers International (SCI) was named Solar Box Cookers International (SBCI). Since then, SCI has grown and now estimates that over 11 million lives have been directly impacted with solar cooking and 4 billion meals have been solar cooked. Early founders and supporters laid the solid foundation for SCI to continue to improve human and environmental health by promoting the cleanest cooking solution – solar thermal. Two of the earliest supporters were Don Coan and his wife Barbara Jodry. Don was a pioneer in solar cooking and worked hard to spread solar cooking worldwide, particularly in Latin America. Barbara actively supported the cause and is still doing so today. The following is a journal entry from Barbara describing her presentation at the SBCI annual dinner, including an experience with Vice President Al Gore and many young people.

Don and I attended the annual dinner of Solar Box Cookers International. I was asked to report on the Orlando trip to Nickelodeon Studios where we served as consultants for a video on environmental awareness, a video that would involve Vice President, Al Gore dialoguing with 55 young people from different states. That part was fun, I managed to be humorous and factual at the same time as I revealed our experiences behind the scenes of television production. I kept glancing at Tom DuHain to see if he cracked a smile.

Then I presented awards for volunteers of the year. Two this year: Randy Smith, who has done so much: his crowning achievement designing and fabricating the booth at the California State Fair. But his other contributions were notable, and I believe few people were aware of how much he has done, I don't believe in giving awards in public and failing to tell the audience rather specifically what the award stands for. Randy phoned me the next day to thank me and ask for a copy of my comments. Shy, self-effacing Randy. A revealing request in more ways than one.

Don was the other recipient, for the second time in five years. I know he deserves it, but he was embarrassed. I'd give him "husband of the year" if I could. He certainly deserves that.

It was so exciting to see people from previous SBCI projects. Barbara Knudsen from the University of Minnesota, with whom we worked at Global Forum in Brazil. She teaches seminars on women's studies and is very active in the international feminist movement. Wife, mother, grandmother, a very wise and witty woman dedicated to the empowerment of women worldwide.

Bob Larson (solar cooking pioneer) had a great bear hug for me. We shared the credit at Orlando, for our success at Nickelodeon, earning a written thank you afterward from Annie Brody of the World Children's Fund. Todd Walton (author and musician) made a big splash with his keynote speech, setting a light tone by harking back to his childhood as a sun worshiper, who tanned but didn't burn, and moving on to how when he cooks with the sun, it neither tans nor burns.

Roma Stibravy, last seen in Honduras, was there with a video she commissioned of solar cooking in India. Other solar missionaries reported from Nepal, Ghana, Costa Rica and Guatemala. It was a great annual meeting. I came away feeling quite proud to be associated with SBCI, which is soon to be known as SCI with the word "box" being dropped from the letterhead.

(Note: Minor edits were made to provide additional context)