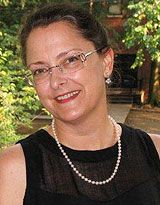 "I am honored to be working with SCI. I attended the 6th SCI World Conference in Gujarat, India, in 2017. This conference revealed to me a worldwide effort by enlightened business owners who all bring solar cookers to villages. There I also saw the large Schleffer array of mirrors which heat hot water for the hospital’s air conditioning and cooking systems.”

Ms. Fishman is concurrently President of NYSES and as such, analyzes legislation and state programs and educates legislative staff to effect change. Ms. Fishman produces the Solar Salon NYC series and yearly NYSES conferences. She travels to local events to show how to cook with the sun and facilitates “Make a Solar Module” workshops.  NYSES is the NY State distributor of Green Energy Times.

Ms. Fishman serves as Vice Chair of the American Solar Energy Society (ASES). She is a Fellow of ASES and in 2014 she was awarded the Rebecca Vories Award for Volunteerism.