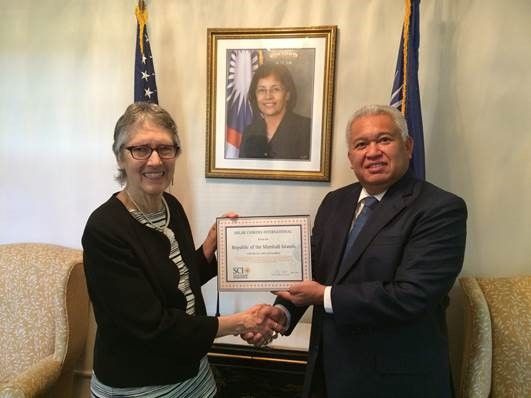 The Solar Cookers International Order of Excellence award annually recognizes the most outstanding people and organizations whose sustained efforts have contributed most to empowering people to cook food and pasteurize water with solar energy.  The Solar Cookers International Board of Directors unanimously agreed to award the SCI Order of Excellence to the Republic of the Marshall Islands (RMI) for its commitment to solar cooking, as evidenced by including solar cooking in its official plan to address climate change.

Solar cooking is critically important and relevant in the RMI.  Angeline Heine-Reimers, Energy Planner for the Republic of the Marshall Islands, spoke about the importance of solar cooking at SCI’s press conference at the United Nations Climate Conference in Poland last December.  She explained, “Climate change is not a future problem, it is impacting the Marshall Islands right now….The land is disappearing with sea levels rising. We are experiencing climate change impacts now. For small islands like mine, where you are associated with the land, your identity is the land. Your culture is the land. If the land disappears, who are you as a person? That’s a very scary thought to think about because it’s hard to imagine who you are without having your home. That is why we are addressing climate change through many avenues, including solar cooking.”  Watch the press conference at https://www.solarcookers.org/about/blog/united-nations-climate-change-conference-cop24

Only 4 of the 20 main islands comprising the Marshall Islands have access to electricity, making this an ideal place to harness solar energy for cooking and purifying water. With an abundance of sunlight and limited access to electricity, solar cookers represent a clean and simple opportunity to improve the lives of many while restricting greenhouse emissions.

SCI Board Member Dr. Peg Barratt presented the Order of Excellence in Washington D.C. at the RMI Embassy to Ambassador Gerald Zackios.  Solar Cookers International encourages other countries to follow the Republic of the Marshall Island’s leadership by including solar cooking in their official policies to address climate change.