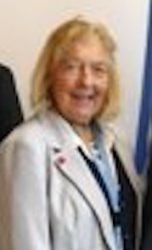 “I was compelled to join SCI to honor and carry on the impactful advocacy efforts that Dr. Sonia Heptonstall was doing on behalf of SCI at the United Nations (UN). I’m drawn to SCI because solar cooking is such a powerful and cross cutting solution, particularly for the health of women and girls.” -Joanna Koch, Solar Cookers International Representative to the United Nations.

Joanna, who joined SCI’s advocacy team in 2020, has been an NGO Representative at the Geneva UN since 1987.  She first represented La Leche League International and was involved with the launch of the WHO/UNICEF worldwide Baby Friendly Hospital Campaign as a breastfeeding adviser. As the Convenor of the NGO Working Group on Nutrition, she was responsible for coordinating NGO input and activities at the FAO/WHO International Conference on Nutrition, in 1992. Since 1993 she was the UN Representative for Associated Country Women of the World, the only worldwide organization active in 79 countries looking after farming and rural women.  At the 1997 Bangkok Global Health Promotion Conference, she was one of the five founding members of the Alliance for Health Promotion and in 2015 became its first Vice President.

Joanna is a long-time advocate for females and appreciates that solar cooking empowers women and girls. She was born and raised in the United Kingdom.  Mrs. Koch has been a resident of Switzerland since 1960 and holds dual nationality.