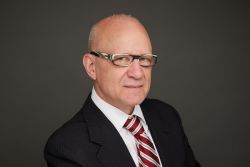 “Having shucked the shackles of corporate life after 20-odd years in IT, as well as 7 years in the photovoltaic industry, I now concentrate as I see fit on causes that matter.  Prominent among these are clean water, sanitation and, of course, clean cooking.

My special interest is institutional solar thermal technology combined with communal involvement of beneficiaries, which I see as an efficient and productive arrangement. Solar cooking solutions for refugee camps hold my particular interest, especially when combined with other projects that relieve the most basic of human needs.”

Mr. Gallett has been an active supporter of refugees and immigrants, having volunteered with HIAS, Kids in Need of Defense (KIND), and the Arab-American Family Support Center. After years as a supporter of SCI, he was invited to participate at the UN High Level Political Forum in 2018, an invitation which was repeated and accepted in 2019.

Mr. Gallett has a B.A. in Political Science and “believes in lives well-lived. The humblest of lives is capable of spectacular results.  I’ve avoided the strictures of ‘career’ and made myself useful where I am, with what I have. While academic degrees may or may not be put to use in one’s professional life, much more benefit can be gained by an autodidact treating the entire span of life as one long, unending university and opportunity for service.  True and lasting ‘Career Achievements’ are better measured in contribution to other lives, and in opportunities provided to the least favored of the world.”

Language fluencies: English, French and Spanish; with a few others in differing degrees of development.