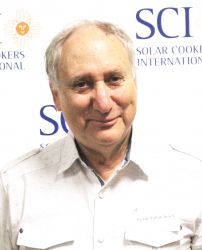 Justin Tabatchnick joined Solar Cookers International in September 2016 as SCI’s chief technologist. Mr. Tabatchnick was a recent retiree from Intel Corporation after 16 years as a senior device test  engineer. Using his expertise and experience drawn from working as an electrical engineer, Justin developed a testing means from both the hardware and software perspectives that focus on adherence to the ASAE protocol for testing and reporting solar cooker performance. Justin’s contributions have enabled SCI to become a leader in the solar cooker sector.

Mr. Tabatchnick has a Bachelor of Science in Physics and Electrical Engineering, with minors in Mechanical Engineering and Mathematics, from Rutgers University, New Jersey.

Justin lives in the foothills of the California Sierra Nevada and enjoys hiking and exploring the surrounding region. His hobbies are geology and astronomy.