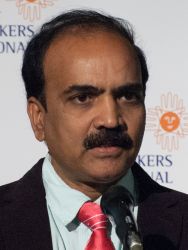 Dr. Ajay Chandak is the Founder of PRINCE (Promoters, Researchers & Innovators in New & Clean Energy) with the mission of energy independence through renewable sources. He specializes in the training of entrepreneurs in renewable energy.  Dr Chandak and PRINCE received the Golden Prize for their innovation of the Solar Paraboloid Concentrator at the World Invention and Technology Expo in Indonesia, along with many awards from the government of Maharashtra.  Dr. Chandak also received the 2017 SCI Order of Excellence for his work in promoting solar thermal cooking worldwide. He served as an organizing committee member of the SCI World Conference in India in 2017.

Dr. Chandak has developed and commercialized many solar cookers, such as the domestic unit PRINCE-15, small community solar cookers PRINCE-40 and PRINCE-60, Balcony Solar Cooker and the large community solar steam cooking concentrator of 25 sqm. He has worked as a green energy consultant to the United Nations and MNRE. He also worked as the  International Solar Energy Society Board Director for two years.

Dr.  Chandak’s education includes a Ph.D. in Solar concentrators, and M.Tech. from IIT Bombay. He works as a consultant, designer & trainer for solar concentrators and renewable cooking solutions including solar, biogas and biomass systems. He opted for voluntary retirement after working as Professor and Principal in engineering institutes and now devotes his full time to the development and promotion of renewable energy.