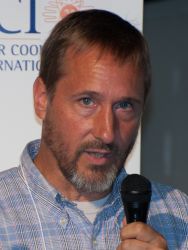 Paul Funk began to appreciate the importance of cook fire alternatives when he saw women in Tanzania spending 20 hours a week collecting firewood. The experience compelled him to change his master’s thesis topic at the University of Minnesota to solar cooking. He continued solar cooking research for his doctorate in Agricultural Engineering at the University of Arizona, where there was more sunshine. His dissertation work eventually led to the development of an international standard “Testing and Reporting Solar cooker Performance,” published by ASAE.

Paul also has designed solar cookers, published two peer reviewed journal articles on solar cooking, and has presented papers on solar cooking at seven international conferences. Paul served on SCI’s Board of Directors from 2000 to 2002.  Mr. Funk is an ardent supporter and practitioner of solar cooking.