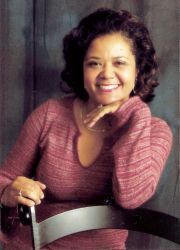 “I was very pleased to show the world that Haitians are looking for solutions for their environmental difficulties…My mission is a solar cooker in every Haitian household,” described Rose Bazile, RNC, MSN, RN about her experience advocating at the United Nations with Solar Cookers International.  “I was able to meet and talk to people who show great interest in solar cooking and want the world to know what Haiti is doing to solve cooking energy crisis,” she further related.  “I was proud and excited to be the voice from Haiti at the UN.  I had a chance to be on Africa and France Radio promoting solar cooking for Haiti.”

SCI Associate Rose Bazile has been advocating with Solar Cookers International at the United Nations High Level Political Forum (HLPF) in New York in 2018 and 2019 and became an SCI Global Advisor in 2020.

She has also collaborated with Solar Cookers International in making solar cookers, and solar cooking knowledge, more accessible in Haiti.  For example, she and SCI Science Director Alan Bigelow, Ph.D., demonstrated and spoke about solar cooking at the Université Notre Dame D'Haïti UDERS De Hinche Science Day in 2018.  They then went on to develop a course curriculum focused on solar cooking for the university.  This curriculum was heavily informed by the world’s largest online database of solar cooking information, the Solar Cooking Wiki.

Ms. Bazile first received her nursing degree at Regis University in 2008. As a Registered Nurse and Clinical Instructor, Ms. Bazile sees firsthand the harmful effects of cooking over open fires, and the benefits that solar cooking provides.  She presented the “Benefits of Non-polluting Cookstoves on Maternal Child Health in Haiti” at Adelphi University School of Nursing and Health Care in New York.

SCI Associate Rose Bazile began researching new technologies that prevent deforestation and protecting the environment starting in 2008. This is where she discovered her interest in solar cooking and saw this as a solution to many of the problems occurring in her native country of Haiti. A year later Rose moved from the Commune of Cotes de Fer, where she grew up in Southeast Haiti, to the United States. She has dreams to see a green Haiti without poverty.  This fueled her to grow within the solar cooking sector and bring this amazing technology to Haiti and beyond.