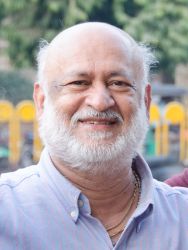 Mr. Deepak Gadhia has been a manufacturer of Scheffler concentrators and steam cooking systems, parabolic cookers, and more. He engineered and helped create large arrays of Scheffler concentrators for institutions, one of which at Tirupati, India, solar cooks 30,000 meals per day. He now mentors and supports many start-ups and is also Chairman of Gehrlicher Solar India Pvt. Ltd.

Mr. Gadhia, and his late wife Shirin Gadhia, were awarded the “Business Leadership Award 2005 for Solar Thermal” at the annual International Congress on Renewable Energy (ICORE). The award was received from the Solar Energy Society of India. “Like all pioneering work, initially the path had been a slow, up-hill process,” said the Gadhias. “But now, due to ever increasing energy costs and environmental catastrophes like global warming, it makes mankind realize that clean, renewable sustainable technologies are the best possible option.”

Deepak Gadhia has moved to the Muni Seva Ashram, serves as a Trustee there, and looks after renewables and sustainability of the Ashram.

Mr. Gadhia was a Solar Cookers International Board member in 2012.